The mission of Cowiche Canyon Conservancy is to protect shrub-steppe habitat and connect people to this vanishing landscape.

How We Achieve Our Mission

Through conservation, we protect and restore the
vanishing landscape for future generations

Through recreation, we create trails and events so that
people can directly experience the shrub-steppe environment

Through education, we preserve knowledge of and
appreciation for shrub-steppe, and its wildlife

A rapidly expanding human population means time is running out to conserve remaining wild areas. We need to act now to protect these places before critical habitat and recreational opportunities are lost.

There has been a steady decline in public investment in the outdoors over the last twenty years, making our mission to protect shrub-steppe lands more crucial now than ever.

Our Commitment to Diversity,
Equity, and Inclusion

We believe that everyone deserves access to recreation and education opportunities that improve health and quality of life.

We value diversity of all kinds – of ethnicity, culture, gender, age, and ability – because diversity makes our community more beautiful, healthy, and sustainable.

We recognize that Indigenous people have stewarded the land, water, plants, and animals of this region for thousands of years.

We strive to partner with organizations that represent people of color and under-resourced populations; we strive to listen to and promote the voices of under-represented communities. 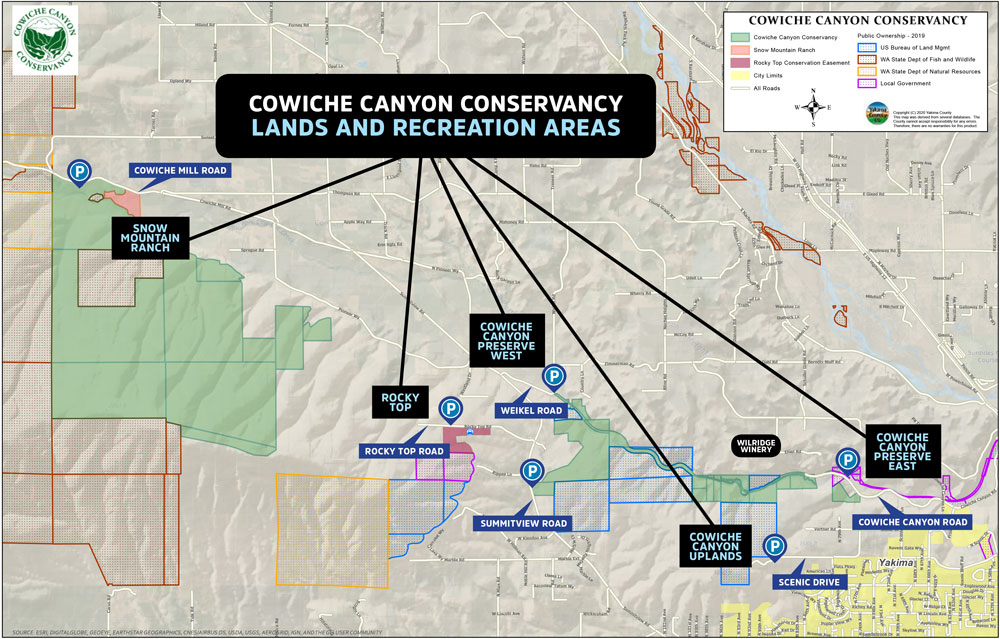 Six miles northwest of downtown Yakima, Cowiche Creek winds between towering cliffs of basalt and andesite. Once a railroad line, the 2.9-mile Cowiche Canyon trail makes nine creek crossings. This flat and packed-gravel trail is best for those looking for an introduction to Cowiche Canyon or for an easy stroll. You can access this trail from the East Entrance or the West Entrance / Weikel Road. Walking beside the creek allows access to a lush riparian habitat as well as wildlife that swoops and chirps above. From the main trail, you can also access the Winery Trail, which leads up to Wilridge Winery, a biodynamic winery on the north bluff of the canyon.

Best parking for horse trailers is at the West Entrance/Weikel Road.

The main access point to the Uplands is the Scenic Drive/Uplands Trailhead. You can also access the Uplands from Summitview Trailhead or the 1.0 mile long East Uplands Trail, which climbs steeply from the main Cowiche Canyon trail. The Uplands, popular with trail runners and mountain bikers, offers stellar examples of shrub-steppe and lithosol zones. It boasts beautiful spring and summer wildflower displays and sweeping views of Yakima Valley.

Snow Mountain Ranch encompasses about 2,000 acres, with an elevation gain of over 1000 feet from the South Fork of Cowiche Creek to the summit of Cowiche Mountain. A trail system of about 14 miles allows access to diverse habitat zones: riparian, meadow, lithosol, and shrub-steppe. In spring and summer, Snow Mountain Ranch offers excellent birding and wildflower viewing. In fall, it offers spectacular color shows of deciduous trees. With winter snows it can be an excellent snow-shoeing destination.

Rocky Top lies between Cowiche Canyon and Snow Mountain Ranch. It offers an extensive trail network – over fifteen miles – for mountain bikers, hikers, and equestrians. A wide-open hillside gives access to some of the best views in the Yakima Valley. Trails wind through old growth sagebrush and magnificent lithosol habitat. The trail system connects to Snow Mountain Ranch along the ridgeline of Cowiche Mountain. This land is managed in partnership with Single Track Alliance Yakima and the William O. Douglas Trail Foundation.

In late 1987, CCC acquired the right of way through the canyon floor for $1,000 and in 1990 the Cowiche Canyon Trail was established. 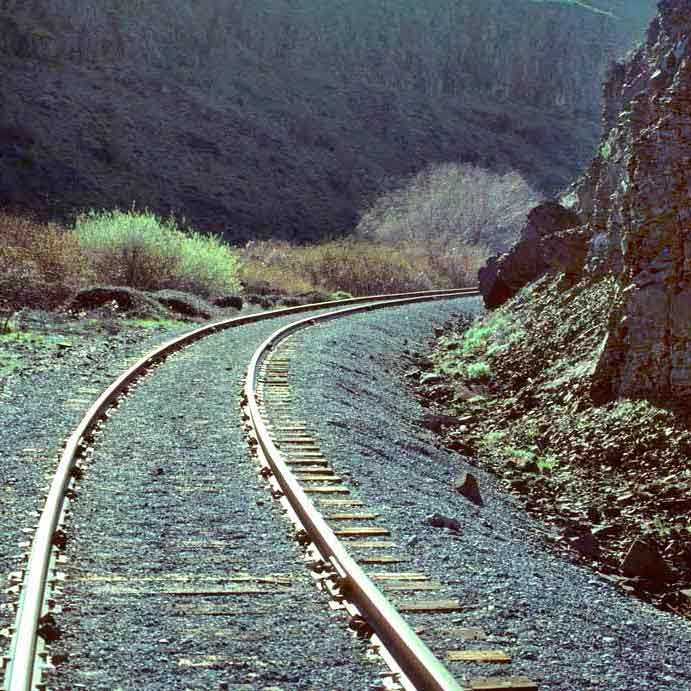 The old railroad tracks that used to run through the lower trail in Cowiche Canyon.

The organization worked over the years to acquire small parcels of land adjacent to the old railbed in the Canyon as they became available. By 2000, CCC owned about 200 acres of land in the Canyon. In 2005, CCC had an opportunity to purchase an 1,800 acre ranch site on Cowiche Mountain, a few miles west of Cowiche Canyon. The purchase of that ranch site, known as Snow Mountain Ranch, grew CCC’s ownership from 200 to 2,000 acres overnight. With more land came more trails, more visibility, and more cost to restore and maintain the landscape. The organization recognized the need to invest in staff and began raising funds to do so.

In late 2009, CCC hired its first full time Executive Director and has steadily grown its programs and staff over the last decade. To date, CCC owns and manages over 5,000 acres of grasslands, sage, flowering meadows, oak woodlands, and basalt cliffs. CCC offers more than 30 miles of trails through several types of ecological zones. The Conservancy’s work ranges from conservation and recreation to community education concerning our native landscapes

Celisa joined Cowiche Canyon Conservancy in 2014. She has 20 years of experience in non-profit program management and administration. Celisa grew up in Yakima and loves being outdoors with family and friends. She is passionate about getting people out on the landscape to experience the unique beauty of the shrub-steppe. 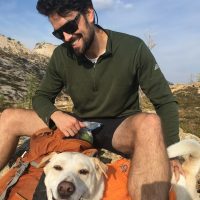 In 2018, Cy joined CCC to strengthen the organization’s educational programming and to deepen local investment in public spaces. He has worked in diverse education, communications, and consulting roles, helping businesses and the public make decisions that consider both ecology and economics. With CCC, he is excited to continue to learn about the wonders of the natural world. 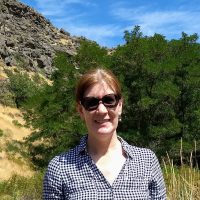 Kristi joined CCC in June of 2019 as administrative support for CCC’s fundraising, membership, and general office activities.  She is originally from Issaquah, Washington and worked many years as a land use planner in California and Oregon. In 2019, Kristi relocated from Las Vegas, Nevada where she managed a non-profit that provided extensive volunteer support to the Bureau of Land Management. She is looking forward to learning about the shrub-steppe landscape and is grateful for the opportunity to join the effort to preserve this beautiful ecosystem. 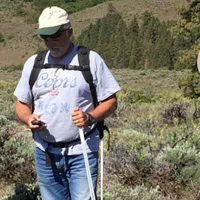 Ted recently retired from a thirty year career as a biologist and manager at the Washington Department of Fish and Wildlife. His many skills are being put to great use in the field as we grow our lands base and recreational opportunities. 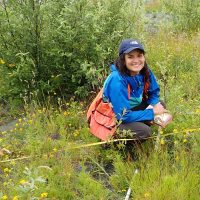 Megan joined CCC in July of 2020. Born and raised in Yakima, she has spent the past seven years working to protect and restore Pacific Northwest ecosystems. She is so excited to return to Yakima and join the CCC’s mission to conserve shrub-steppe habitat- an ecosystem near and dear to her heart. In her free time, you can find her gardening, searching for the perfect pickle recipe, and exploring the hills by ski, bike, or boots.

Our Board of Directors

“Thank you for all you do in helping preserve our natural resources and environment and allowing us to be part of the process of education and conservation.”

CLOSURE (1/23/22): All single track trails at Rocky Top are CLOSED due to mud. Closure protects fragile trails and lands from damage. Rocky Top trails will likely re-open on April 1, after winter damage is repaired.

PLEASE NOTE: We will be monitoring CCC trail conditions for mud. If you find significant mud, please let us know, and turn around to prevent trail damage. Thank you!